Step 1 - You have to be Kinoe and have max stats (excluding lung cap, breathing lvl, and sin)

Step 2 - Kill Demons until you get the Rusty Key.

Step 4 - After killing the boss, kill a player (civilians are excluded) or demon NPC's, there's a 1/8 chance on getting the Slayer Mark. 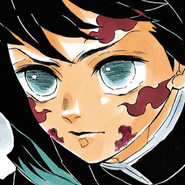 Example of a Demon Slayer awakening their Slayer Mark 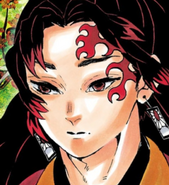 Kamado/Tsugikuni Slayer Mark cosmetic
Add a photo to this gallery

If successful, it should say "I feel stronger... (PRESS Y) "

The Slayer Mark will double your stats, and give you flash step. The cooldown is 2 minutes, and it lasts 1 minute.

The true origin of the demon slayer mark is unknown. although it is said to appear in the most skilled demon slayers aka. the hashiras. it looks somewhat like a tatoo. scar and birthmark, every slayer mark is unique for it changes shape and color for other breathing hashiras. the first recorded person with the slayer mark was in the sengoku era, was none other than Yorichi Tsugukuni. the first Breath of the sun user and the most powerful demon slayer. it was considered the golden era of the demon slayer corps, one hashira after another started receiving the mark, and were inches away from defeating muzan. although it soon ended when hashiras started dying at the age of 25, but yorichi still had it even past the age of 25. the golden era was over, and there were no more people with slayer marks till it reappeared to Tanjiro Kamado. and all the hashiras too started getting one. and the rest are mangga spoilers.

Retrieved from "https://wisteria-roblox.fandom.com/wiki/Demon_Slayer_Mark?oldid=1368"
Community content is available under CC-BY-SA unless otherwise noted.